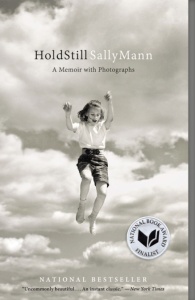 Hold Still: A Memoir with Photographs by Sally Mann
(Little, Brown and Company, 2016)

Hold Still by Sally Mann tells the story of a famous and controversial photographer’s personal history whilst digging into the sleepy culture of the American South. Mann’s ability to write her memoir with such honesty surrounding the connections between her past, present, and future is certainly admirable. The writing is poignant and beautiful, and reminds me very much of my experiences in the South. The stories are written with such emotional depth, and the photographs in the memoir contribute to this emotional intensity. Themes include the artistic process, rebellion, fame, family and controversy. The book is split into four sections categorized in the following order: 1) stories of her childhood in rural Virginia, 2) memories of her mother, 3) her observations of racial injustice in the South and 4) memories of her father.

The beginning of the memoir places us in Mann’s hometown of Lexington, Virginia. She writes, “I grew up into the person I am today, for better or worse, on those lifeless summer afternoons having doggy adventures that took me far from home, where no one had looked for me or missed me in the least” (19). This upbringing influenced her photography, as she was able to spend so much time alone in nature. She describes herself as being a rebellious teenager, always having a boyfriend and always staying out late. She writes of Lexington with loving affection but also admits that it was an isolated place, split up by class and deeply rooted in racism.

At boarding school, Mann took her first photography class and began to discover what she calls the “thrill” of seeing the negative in front of her (36). She explains that the artistic process is worth it because one has experienced the joy of making something. I believe that the process of writing for Mann is similar to photography—she knows that all of these moments in her life will pass, but she still has her stories here, in someone’s grasp, and that she has created something through experiencing her life.

The photograph “Deep South, Untitled (Scarred Tree),” which is featured in the book, was taken on a road trip Mann took on her own, going through Mississippi, Alabama, and Louisiana. It is apparent that the sleepiness of the South is depicted in this moment. The tree looks like it has been cut at one point, giving the photograph a sense of damage. The tree appears to be old, and because no person is in the photograph, the tree becomes our main focus. Mann’s talent is apparent in each photograph she includes in the book.

The setting of this memoir is essential because it relates to both Mann’s work and her memories. The South becomes a character itself, and she analyzes its significance by describing the feeling of nostalgia permeating the region. She writes, “I believe we in the South have a different sense of time and its exigencies” (81). Mann is able to explain to the reader in a precise manner how time moves differently in the South compared to other parts of the country. She goes on to directly quote British historian John Keegan, who wrote, “The thing about the South is that it retains for Europeans . . . a lingering aftermath of defeat . . . Pain is a dimension of old civilizations. The South has it. The rest of the United States does not” (81-82). Mann manifests this nostalgia through her photographs, which are often captured in the South. Mann acknowledges that the pain of generations of Blacks who were treated so terribly remains today. The contradiction is that, even in this awful history, the scenery of the South is stunning and haunting, which makes writing about it and photographing it that much more difficult and strange.

Mann’s career began in the 1970s, but evolved in the ’80s and ’90s, as photographing her children brought controversy around her work. Mann defends her reasoning behind taking controversial photographs of her kids by stating she took most of them when the children were simply playing naked on their farm. Commentary about photos of her young daughter Virginia was written in The New York Times, which stated, “‘Fallen Child’ is beneath contempt as it uses and manipulates and distorts this poor child for no apparent artistic reason” (150). Another Times writer stated, “Mann seems obsessed with situations which may prove disturbing to her children in a few years . . . Time will tell whether and how much her children have been emotionally damaged by her photographs” (139). The nudity, she explains, is really showing the state of being a child. She does not intend for it to be sexual. However, many people argue that Mann’s photographs were not appropriate to publish. I understand both sides of the argument, but I tend to agree with Mann, because I see the photographs as artwork, not sexual material.

Sally Mann has established herself as both a talented photographer and a talented writer in this memoir. She is vulnerable in her writing, and her vulnerability is what makes this memoir so achingly beautiful and compelling. In discovering her beliefs on photography, we also discover her beliefs on writing, and both art forms (when told by her) are honest. This is what makes her art timeless and fantastic.

Palmer Smith is a graduate of Sarah Lawrence College and an incoming MFA and MA student. She has written for Refresh Magazine, The Online Journal for Person-Centered Dermatology, Sea Maven magazine and Calm Down magazine, with work forthcoming in The French Press Zine.
Loading Comments...