tidbits, fragments, and ephemera is a sometimes substantial but not making any promises glimpse at some information and news related to Generation X in the Deep South.

A wrestler-turned-sheriff versus the bad guys, 1960s

The first reports come in the 1960s about the small-town Tennessee sheriff who had federal law enforcement helping him to raid moonshine stills and combat crime. Buford Pusser’s name and image can be found in professional wrestling advertisements in the very early 1960s, before he became the police chief in Adamsville then the sheriff of McNairy County. By 1963, his name was appearing in the newspaper as he led the charge against illegal liquor producers and other criminals. But it was rough going. In one report in The Tennesseean from January 1965, Pusser and the FBI returned to their cars to find them destroyed, along with all of their equipment. Retaliations like these were common. Two years later, it got much worse, and his mythology began.

By 1967, the headlines had gotten more frequent, and on August 12, 29-year-old Buford Pusser was the target of an assassination attempt. He was riding his car with this wife when it was riddled by gunfire. Sheriff Pusser was wounded, but his wife Pauline was killed. The attack was brutal. Law enforcement officials found bullets or casings from a 30-30, a 30-06, and a .44 magnum. One witness called it “the worst thing I’ve ever seen.” The ambush appeared to have been a set-up, because an unknown person had called Buford’s father to request that he be sent to a home. Initially, the young sheriff said no, that he would not go on the call, but the person called the Adamsville Police Station and insisted that he come “right away.”

Publication of The Twelfth of August, 1971

Tennessee native WR Morris wrote this account of Buford Pusser’s story, which was a bestseller in its day. Morris was born in Reagan, Tennessee in 1934 and served in the Air Force in the mid-1950s. His book sold well but, unfortunately, it did not receive universal acclaim. After its release in November 1971, Nashville’s Tennesseean said it was “as exciting as Pusser’s life,” while the Memphis Commercial Appeal‘s reviewer wrote: “If there’s an award for the undefinitive biography of 1971, The Twelfth of August would win it hands down. It’s a downright shoddy account [containing] silly dialogue, misspellings, and oozy hero-worship.” Morris later wrote another one on the subject,The State-Line Mob, which was published in 1990.

This now-classic film, starring Joe Don Baker as Buford Pusser, was widely hailed in our youthful circles as being rare due to its extreme violence. Released when even the oldest GenXers were still small children, the movie’s setting and plot contained backwoods bars, prostitutes in trailers, bloody brawls, and violence against law enforcement— not exactly kids’ stuff. Alongside the more palatable portrayals of outlaws in Smokey and the Bandit and The Dukes of Hazzard, Walking Tall was the hard stuff. This time, the bootleggers were not friendly, smiling goof-offs in search of a good time but instead were men who would blast a country sheriff with a shotgun while his wife was in the car with him. It took most of us a long time – well into the 1980s – before we would see this movie, but it still lingered in sense of our Southern-ness as the coup de grace of what a badass was. And we learned that a badass carries a big ol’ stick.

On August 21, 1974, 36-year-old Buford Pusser was killed in a fiery car crash. He was driving home from the county fair in his new Corvette, and his teenage daughter was in the car behind his. Witnesses say he swerved off the road then was thrown from the car, which burned up. In yet another tragic twist to his life story, his daughter watched him by the side of the road.

It’s possible that enough people wanted to see a movie about Buford Pusser, but Walking Tall was just too violent. If that was the case, the made-for-TV movie starring Brian Dennehey could have been the answer to the problem.

level:deepsouth is an online anthology about growing up Generation X in the Deep South during the 1970s, ’80s, and ’90s. The anthology is open to submissions of creative nonfiction (essays, memoirs, and reviews), fiction, poetry, and images (photos and flyers), as well as to contributions for the lists. 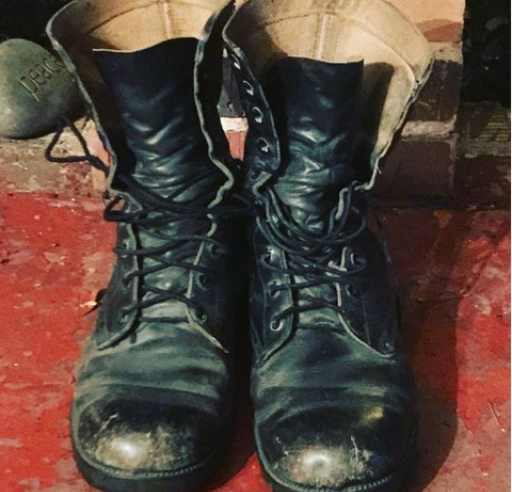 I was a fourth grader at Austell Elementary School in Austell, Georgia in the Blessed Year of America’s Bicentennial when I first met I Richard. I had reason to think I was a pretty smart kid, routinely placing second in the annual Key of Learning reading contest behind Stacy Thorton, who always left me with remnant Silver and a modest smattering of leftover applause. I thought I knew it all, but despite my status as a smart kid, in 1976, I didn’t know dick.

Richard Hasty crashed into Mrs. Elrod’s classroom that August on a muggy Open House night wearing a snot-stained green t-shirt and established himself as an immediate problem. He picked up each and every item on Mrs. Elrod’s desk and shelves, examined each one closely, and sat each one back down in a different location or simply dropped it on the floor, eventually throwing, and shattering, a rare Panama City Beach water globe. Richard’s morbidly obese mom ignored most of his property displacement and destruction but would occasionally remove her cigarette, cough, and belch a perfunctory “Stop it, boy.”

Richard didn’t stop it. He simply shook his unkempt curly red locks and moved on to the next item. Mrs. Elrod aged a little that night. She would get a lot older before spring.

There was some part of me that was glad Richard came to Austell Elementary. Suddenly I was not the only white trash boy in the class, and Richard’s version was an inoperable stage-four case relative to my petty rebellions. Richard could neither read nor cipher. He cursed, stole, lied, broke stuff, kicked people, and threw everything he touched. Something was always flying in Mrs. Elrod’s class: pencils, erasers, hair bows, and even peanut butter and jelly sandwiches. I actually think Mrs. Elrod slimmed a bit that session, simply by marching Richard to Mr. Sprayberry’s office three or four times each day.

Richard was immune to every known didactical behavior intervention of the era. Even a few hardy whacks from Sprayberry’s much-feared “board of education” found no corrective purchase. Richard was incorrigible, an adjective I encountered in a racy true crime book. I thought I might never find an opportunity to use it . . . then I met Richard.

As a general policy, I gave Richard a wide berth, though he did manage to kick me on occasion as I walked past his isolation desk on my way to the pencil sharpener. It’s not as if Richard sat atop the well-established male pecking order. He was outside of it and kicked everyone with pure democratic abandon. Even the bigger boys who might have bested Richard in fair fisticuffs understood the innate advantage of insanity. So, I generally avoided Richard, but I always watched him, for both personal safety and endless entertainment.

One day at recess, I observed Richard gathering hard green cones from a pine tree at the edge of the playground. It was odd that Richard was even at recess, a privilege he rarely enjoyed. I was not shocked by this act of gathering. If artillery is your calling, then amassing ammunition is just part of the process. What he did next though was shocking, even for Richard.

Richard removed the perpetually snot-stained green shirt and transformed it into a functional munitions poke. And then – as God is my witness – the little hellion ran behind the lunchroom into the teacher’s lot and began chunking the cones at Mr. Sprayberry’s pristine baby blue Buick Electra 225. I followed, and watched from a distance. Honed by what I assumed to be incessant practice, Richard’s aim was deadly, and within five minutes, the shiny clear coat was well-abraded. However, no one else but me saw.

A janitor soon discovered the scene, and all the classes went in lockdown mode. The great inquisition began. For the next several days, all the students faced repeated interrogation. Sprayberry questioned me twice, the veins pulsing in his bald crimsoned skull; twice I held fast. Everyone assumed Richard’s guilt, but wanton Buick vandalism must be proven beyond a reasonable doubt. Old man Sprayberry demanded evidence. Proof of such a transgression would warrant a complete expulsion.

After ten days, Richard cracked – more from boredom than contrition, I expect – and spilled the pinecones himself. Sprayberry won. Mrs. Elrod won. I guess we all kinda won. The pencil sharpener path and the peanut butter sandwiches were all safer. Once again, learning at Austell Elementary school was mundane and benign.

We heard the school board sent Richard to a special school where they thought they knew how to handle throwers and kickers. We heard Richard proved them wrong. We heard that Richard played chicken with a new F-150 and lost. We heard he survived but walked with a limp and couldn’t kick very well anymore. We heard Mrs. Elrod retired early, took up smoking and drinking, and moved to Panama City Beach. That’s just what we heard.

Beginning in April 2022, level:deepsouth will also be open to submissions of short fiction and poetry. The subject matter of submissions should still center on the experiences of Generation X in the Deep South during the 1970s, ’80s, and ’90s.

To be considered, a short story or poem must either have been 1.) written between 1970 and 1999 while the writer was growing up in the Deep South, or 2.) the subject matter should center on growing in the Deep South during that time.

Before submitting, writers and poets should read the guidelines thoroughly then query the editor, providing the information requested.