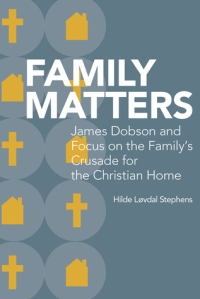 I had not thought about the phrase “focus on the family” in years. I’m now approaching 40, and as a 12 or 13-year-old, I remember listening to the cassette tapes of the radio show Adventures in Odyssey, produced by James Dobson’s Focus on the Family.

The tapes were stored in my brown pleather cassette case, next to music I was getting into, at my Dad’s influence: Queen’s Greatest Hits, The Beach Boys, Journey, Chicago, and Meatloaf’s Bat out of Hell 2: Back into Hell. I have fond memories of Dad and I popping in one of these tapes and rolling around town in the Dodge on a Saturday morning performing various errands and getting our haircuts at Dick’s Barber Shop.

Next to those tapes were my own mixtapes recorded from the radio, which spanned pop, rock and  oldies. While I do not remember the specific Adventures in Odyssey content, I do remember the format being centered around introducing moral lessons in a comedic style to children. To me, they were church and were part of an ever-growing nonsecular inventory of audio in my collection. In addition to my secular music, I began shifting from tapes to CDs, and added titles from Christian bands, such as DC Talk and Jars of Clay. Adventures in Odyssey just sort of slipped into the mix, and my sister and I would listen to a tape every now and then. I don’t know exactly how I obtained the tapes, but around that time I started attending youth group, and I’m certain the tapes were part of the outreach at my church. Today, we might refer to Adventures in Odyssey as a podcast, and the tapes, the physical version of episodes.

At the beginning of the book, Stephens settles into the context of her research on Dobson, in which Christian equates to Evangelical and means white, middle-class America, and today, as was during the 1990s, this is evermore true. We are seeing a resurgence of the principles of white Evangelicals in many facets of society as a solution to our complex problems. And this is what Dobson has fought for his entire life.

I am not a Dobson follower, and prior to reading this book, I had not thought about him or his work in many years. The central thesis to Dobson’s work is that the family is the foundation of American society, and without it, everything will crumble. My parents were not huge followers, but Dobson’s work was particularly prolific in the 1990s and thus became part of just about all churches’ sermons and the youth programs we attended. Through Stephens’ comprehensive research, I learned so much more about Dobson and his dogged desire to link everything to family: sexuality, race relations, politics, and parenting. I did not really get this when I was 13; however, as I have now become a husband and father, I now see his broad castigation of all things, in his opinion, that could undo the nuclear family.

Stephens examines Dobson’s rise through his teachings, books, and many pamphlets spanning his fifty active years of lobbying for a return and amplification of the family structure. His notion of family structure – one husband, one wife, and children – is both familiar and foreign to me. While I grew up in a proverbial nuclear family, it was not without strife. Today, I have close relationships with people who did not grow up in that structure. And to Dobson, that is the problem to explain many other problems.

Stephens thoroughly explains the history of how influential Dobson and his organization have been in shaping Evangelical churches, and government policies. One moment from the book which stood out to me, as possibly the most pivotal for Dobson, is how he successfully aligned with other prominent Evangelical leaders, such as Billy Graham, and Robert Schueller, both of whom granted him unprecedented authority to speak to their congregations. The prolific nature in which his messages spread, and how his authority strengthened, led to his relationship with both the the Carter and Reagan administrations, and more recently, his fight with Obama administration policies, and now as an ally of the Trump administration.

Dobson is not without controversy, and I remember how his positions on topics such as sexuality, race, and more recently same-sex marriage became public and evolved into political battles. Stephens discusses many of his controversial opinions, which were issued in pamphlets and which he would defend in the public, then refine, strengthen, or rescind based on feedback.

Today, that pleather cassette case and its contents are long gone. I’m certain the whole lot was sold at one of my mom’s yard sales. However, what did stick with me is my love for music, especially what I considered ‘oldies’, and the Saturday morning truck rides with Dad. Those experiences brought me closer to my Dad than anything the Adventures in Odyssey tapes tried to teach. After reading this book, I am left with a much better perspective on how Evangelical ideals permeate society and government, all orchestrated by Dobson and his organization. Now, as I take on my role as a father, I reflect fondly on the experiences with my Dad and wish to recreate the same for my son. Maybe, something stuck after all.

Charles Reed was born in Florida and lived there most of his life, and after marrying a girl from Alabama, he calls Montgomery home. He works in the computer software industry and recently decided to start writing things down.

Charles Reed was born in Florida and lived there most of his life, and after marrying a girl from Alabama, he calls Montgomery home. He works in the computer software industry and recently decided to start writing things down. View more posts

This site uses Akismet to reduce spam. Learn how your comment data is processed.